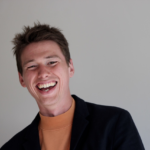 Joel works as a dance artist, choreographer, movement teacher, and fitness instructor. Since graduating from Laban with a 1st Class Hons degree in Dance Theatre, Joel has worked as a performer for a range of internationally renowned companies such as, Pina Bausch’s Tanztheater Wuppertal, Luca Silvistrini’s Protein, and Hagit Yakira Dance. As a choreographer he has performed his own work at a variety of established venues both in the UK and abroad, such as Sadler’s Wells, The Place, Tripspace, and L’Escaut (Brussels). He was also commissioned to create a dance film work for Ballet Boyz in 2020, which will be premiering in the Autumn on Channel 4. His company has received Arts Council funding over the last four years consecutively for the research and development, performances and touring of multiple dance works.
Joel began teaching Barre in 2019 – combining his understanding of multiple dance techniques and peak fitness training. Later that year he completed his training in Sculpt, Dynamic Body, Dynamic Stretch, and HIIT. As a teacher he is particularly interested in enabling students to develop a better understanding of their bodies (individually), thus maintaining physical fitness for longer periods of time and preventing injury. His classes focus on improving core stability, stamina, flexibility, body alignment, and muscle tone, whilst concentrating on promoting mindfulness and general wellbeing.