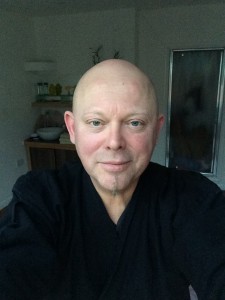 My name is  Marcus van Slageren and I am  a Dutch Therapist of Traditional Oriental Medicine (TOM).
I have been studying and practicing TOM since 1988.
I worked in mental health care in The Netherlands in Utrecht and Amsterdam from 1979 till 1991.
During those years, I worked in the field of special needs people’s care and autism, in  psychiatric institutes and later in an
intervention team in Amsterdam, dealing with violence, drugs and abuse in the family environment.
I  passed the Dutch National Exam for deep tissue and sport massage in 1989.
From 1982 till 1986 I studied Tai Chi and Chi Kung in the Benjamin Lo school in Amsterdam.
I  graduated from ‘Hogere School voor Shiatsu Amsterdam’ (Higher School for Shiatsu Amsterdam)  in 1989.
The next year (1990)  I became a teacher there, till 1993.
In 1987 I had started simultaneously to study in L’Academie Europeaine de IOKAI  (Shiatsu and Traditional Oriental Medicine) with Kasunori Sasaki Sensei (who brought the Zen Shiatsu from Masunaga Sensei to Europe) where I graduated in 1992.
Between 1991 and 1992 I studied pulse diagnose with professor Heng from the University of Shanghai, China.
After moving to Spain in 1993, I studied acupuncture in CENAC Academy in Barcelona, graduating in 1997, followed by one clinical year in the academy.
I established my practice in Traditional Oriental Medicine, Acupuncture, Shiatsu, Chi Kung and Life Coaching in Barcelona in 1997.  Focusing apart from general medicine on posture,  pain treatment, anxiety, immunity, mental health, fertility and pregnancy.
I moved to Brighton in 2013 and I hold a practice in Barcelona and in Brighton. I work in Barcelona  one week a month.
I trained for two years in Facial Enhancement Acupuncture and after my exam, I now am a member of the Cosmetic Acupuncture UK  since September 2021.
I am a member of The Acupuncture Society UK since 2014.